NOT all entrepreneur stories offer an exciting journey. Some have it plain sailing, relatively speaking, in their journey.

Jeffrey Khow, who became a proud father over the weekend, is fortunate to be in this latter category.

An entrepreneur straight out of high school in 1998, he and his founders parlayed their coding skills – starting with building websites and troubleshooting tech issues for friends – into a multimillion-ringgit hosting company today, with thoughts of going for a listing.

The one constant in their journey has been their ability to learn fast from bad experiences, and to execute.

Shinjiru Technology Sdn Bhd was founded by Terence Choong, who is still the chief executive officer. He brought in Khow and Shaun Lim Shan Her as his cofounders. The trio put in a combined RM5,000 (US$1,380 at current rates) to start their business. [Edited with name of third co-founder added.]

Choong prefers to stay in the background, leaving sales, marketing and branding to Khow, who is sales director while Lim is the chief technology officer.

Yet, most people would not have heard of the company, even though Shinjiru along with Emerge (now listed on London’s AIM exchange and known as Rapid Cloud International) are webhosting pioneers in Malaysia.

“We are poor in branding and marketing,” admits Khow. Shinjiru, in Japanese, means ‘To believe.’

This is also an outcome of the fact that they were “just doing it for fun,” he recalls of those early days. “No one expected the business was going to fly and do so well,” he admits.

In fact, at a time when there was a land-grab going on for dotcom domains, Shinjiru did not even register for its domain, happy to offer tech services on a project basis while reselling hosting services for companies based in the United States.

18 months later, in 2000, they figured they wanted to participate directly in the hosting business that offered recurring income.

Fortunately, the relatively obscure Shinjiru name did not attract any cybersquatters and they were able to register the domain.

Thinking they could target the companies they had sold hosting services to earlier, and with the promise of local support, they focused on selling to Malaysian companies.

“But it did not work, and this was mainly because Malaysia was still on dial-up access then,” says Khow.

They then decided to build their own hosting site and target customers overseas. That first day – no, make that the first hour – was tough, as Khow recalls their first live server going down after just 30 minutes from a virus attack! [Edited for clarity.]

“We had a lot to learn about the world of hosting and especially about security,” he says. And they did.

The hosting business worked better than expected and helped them land even more international customers, to the extent that 70% of their customers were from overseas by 2002.

A lot of the Malaysian customers back then were small and medium enterprises (SMEs) which were manufacturers. Khow credits his entrepreneur father for this.

“Because he ran his own business as a tractor manufacturer, he was able to open doors for me to meet many sceptical SMEs which I was able to convince to try us,” he says.

The fact that websites were seen as non-critical assets in those days also helped him convince the SMEs to allow Shinjiru to host their sites. 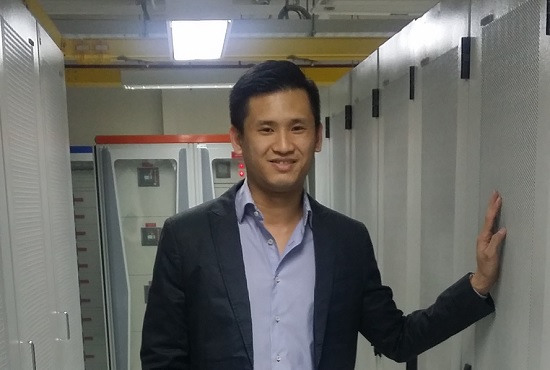 Khow (pic above) describes 2004 as the year the business really boomed. He pinpoints a number of reasons.

“There was a general improvement in the data centre connectivity and stability in Malaysia that translated to better service for our customers. At the same time, we also just got a lot better at running a global hosting service,” he says.

All in, it claims about 1,600 sq ft of data centre space spread across the five Malaysian-hosted data centres. Overseas, it has 30 server racks, with each rack hosting 20 servers.

The second reason for the boom from 2004 onwards was that, having already been in the hosting business since 1998, the market was starting to take notice of Shinjiru as well, also thanks to its SEO (search engine optimisation) efforts.

While all was going smoothly, it did have a bitter experience in 2006 when it seized on the new trend of virtualisation and offered such services to the market. However, it found the market was not ready for the service and worse, despite vendor spiel, the technology was not ready either.

“It was a very big problem for us then and we felt like guinea pigs,” says Khow, recalling upset customers.

Still, seared by that bitter episode, the two gladly sat out the early wave of cloud providers in Malaysia and only got into the space in 2014.

“We took our time to observe the market for over two years before finally picking Microsoft as our partner,” says Khow.

Shinjiru signed up with Microsoft’s Azure Platform-as-a-Service (PaaS) cloud service, the first hoster to offer it from data centres in Malaysia. It was a big deal as it had to convince Microsoft that its quality of service would be good enough to not damage the US tech giant’s cloud brand.

This measured pace at getting into the market worked because Shinjiru was engaged by national ICT custodian Multimedia Development Corporation (MDeC) to be its partner in encouraging Multimedia Super Corridor (MSC Malaysia) status companies to convert their solutions to become cloud-enabled.

MSC Malaysia, managed by MDeC, is a national project dedicated to boosting the ICT industry in the country.

With the cloud-enablement drive, MDeC and Shinjiru are helping to achieve the aim of Digital Malaysia, a national programme that aspires to transform Malaysia into a ‘digital economy.’

Amongst other areas, the digital transformation programme announced in 2011 targets “to build an ecosystem that promotes the pervasive use of ICT in all aspects of the economy to create communities connected globally and interacting in real-time.”

Specifically, among the three strategic thrusts that will leverage on new and existing initiatives to drive Malaysia towards a digital economy, the MDeC-Shinjiru initiative to cloud-enable software applications sits well with the thrust to evolve from ‘low knowledge-add’ to ‘high knowledge-add,’ while developing talents in key industries to become knowledge workers.

“We provide and deploy the cloud platform for MDeC, which funds MSC companies with an RM15,000 grant to take up cloud subscription with us,” says Khow, very proud of the fact that MDeC felt Shinjiru’s cloud platform and services were good enough for its cloud push.

“We have signed up 45 ISVs (independent software vendors) so far which have MSC Malaysia status, and have a budget from MDeC to sign up more,” he adds.

Despite still having a budget to help companies with their cloud migration, Khow’s biggest challenge is that many ISVs still are not aware of MDeC’s programme.

While its brand may not be well known, in its own space, Shinjiru is well positioned, as witnessed by its claims of having close to 40,000 SME customers, mainly Malaysian.

It used to have more international customers, but Khow is happy with the predominantly local customer ratio he has.

“You cannot depend on international companies because their churn rate is quite high as they have higher technical capabilities, which means they can move easily,” he says.

“With ‘locals,’ once you build a relationship with them, they will stay with you,” he adds.

While he says that going for a listing has been discussed, and with a decision to be made this year, the focus moving forward continues to be on its cloud services and on selling Microsoft’s cloud-based productivity suite Office 365 to its almost 40,000 SME customers.

He observes that many are still clinging to their old productivity solutions but believes that it is inevitable they will migrate to cloud-based ones.

It is yet another in a long list of services that Shinjiru chooses to focus on, based upon a realistic assumption of where the market or its customers are heading.

Click here to chat with us in Telegram. Our Telegram chat is from 9am to 6pm, Monday - Friday.

Please leave a message after the working hours and we'll get back to you. For 247 tech support, please visit http://tiny.cc/ecx59y